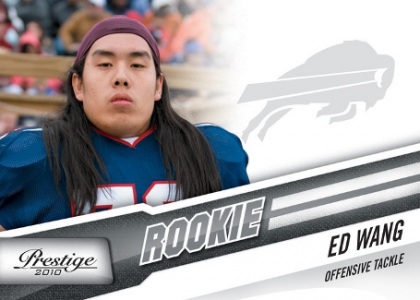 Virginia Tech’s Ed Wang becomes the NFL’s first full bloodied Chinese American player. The 6-foot-5, 315 pound offensive tackle was selected in the fifth round (the 140th overall pick in the 2010 NFL Draft) by the Buffalo Bills. He ran 5.14 in the 49 yard dash and bench pressed 225lbs 29 times at the NFL combine. Growing up he was a Redskins fans. He’s stated that growing up he didn’t have any Chinese athletes to look up to. Ed will look to be a role model for young Asian Americans across the country

Both of Wang’s parents were members of the Chinese Olympic track and field team in the 1980s. His father (Robert) was a high-jumper, while his mother (Nancy) participated in the hurdles, so he definitely got athleticism running through his blood. Since childhood, Ed Wang has trained hard under the tutelage of his parents. He grew up in a a strict household. Ed couldn’t date until he got a college scholarship. And no driver’s license til he was 19 years old. His parents also shipped DVDs of Ed playing back to family in China

Wang Looking To Make History In The Draft