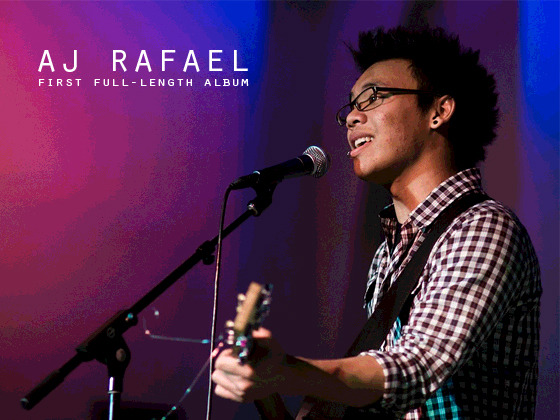 Singer/Songwriter AJ Rafael is working on his first full length album and needs your help. The money he raises for the project will go to producing, equipment, CD pressing and duplication to help make this album possible. If you want to support AJ Rafael and his music, go here to contribute. Depending on your level of support you can get all kinds of cool stuff from AJ Rafael including his album, YouTube shoutouts, stickers, personalized notes, and you can even have your picture included on the inlay of the album.

Remember, funding on Kickstarter is always all or nothing. If this project doesn’t reach its funding goal, he won’t receive any funds. So pledge what you can!

If you’re not familiar with AJ Rafeal’s music, be sure to listen to When We Say (Juicebox), MidKnight, I Just Want You, (500) Days, and We Could Happen

More about AJ Rafael
AJ Rafael is a true believer in music and is respected by many artists both nationally and internationally. With nearly 200,000 subscribers and 40 million views on YouTube, 70,000 Facebook fans, 11 million plays on MySpace, and with social networking sites like Twitter and Facebook, Aj has successfully been able to spread and share his music with the world and help raise awareness for organizations and charities he holds near to his heart (one of them being
Music Speaks, a movement AJ started to raise autism awareness through the power of music, and the Mahal Foundation, an organization helping to fix the poverty in the Philippines). AJ hopes to inspire more people to have music in their lives and stresses that things like popularity and money… all of it is temporary, but music is forever.