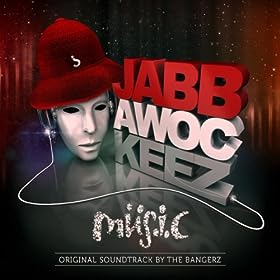 The soundtrack to the Jabbawockeez Las Vegas show Mus.I.C has been released today! The music was created by The Bangerz out in the San Francisco Bay Area. Here’s the listing for the 14 track album:

This is some sick electronica/hip hop dance music. See why Jabbawockeez x The Bangerz make such a deadly duo. Furthermore, listen to why the Jabbawockeez teamed up with The Bangerz crew (Cutso, G-Wrex, Goldenchyld, Nick Ngo, Replay, and Squareweezy.) Cop the Mus.I.C. album on

or amazon. Also see the Jabbawockeez in person for the Mus.I.C. show at the Monte Carlo in Vegas.

If you’re in the San Francisco Bay Area, you can catch The Bangerz live at the 2011 San Francisco International Asian American Film Festival (SFIAAFF) at the Directions in Sound on Friday March 11, 2011.

update: thanks to Jabbawockeez for showing us love on twitter.

Sleep Wockin with the Jabbawockeez

More about The Bangerz
The Bangerz are a 6-man unit with more than 15-years of DJ and production work under their belts. They’ve won numerous titles of prestige, including the 2000 ITF Western Hemisphere Team Championships and were also the 2001 DMC Regional Champions. They’ve been innovators to boot, utilizing 12-turntables for a team routine back in 1999 that transcended gimmicks—a feat that turntablism hadn’t witnessed up until that point. And as of late, you’ve heard their original music featured in McDonald’s ad spots, The Simpson’s video game, MTV’s America’s Best Dance Crew, and recent Pepsi commercials. In the San Francisco Bay Area, they successfully run party promotions, including Ta-Dow (Oakland), Music Machine (SF and San Jose), and Strut (SF). These parties are booming nights in their respective cities, hosting local talent, DJs, and guest performers from across the country. They’re veterans of the stage, performing live and opening for Afrika Bambaataa, The Clipse, ?uestlove (of The Roots), Raekwon, Ghostface, Kid koala, and The Rapture, amongst many more. They’ve clocked miles on the road too, touring with Carlos Mencia, The Jabbawockeez, and DJ Z-Trip on both national and international levels. Off stage, time in the studio has been non-stop, collaborating with the likes of Rakaa Iriscience (of Dilated Peoples) and crewmember, Replay, currently is the in-house producer for Apl D Ap (of Black Eyed Peas). Their official group album, Vi.R.Us, debuted in 2003 and was an independent release (sold-out and long out-of-print) that widened their fanbase all the way to Japan. The Bangerz are spiraling upward with each remix, collaboration, TV ad, stage routine, video game spot, and city-to-city tour. Bay Area heads know them individually by name, as their brand is now a part of local lore. The boiling point hasn’t been reached, but things are bubbling. Shake hands―you too are now acquainted. Now you know. Act like it.

3 thoughts on “Jabbawockeez Mus.I.C soundtrack by The Bangerz”