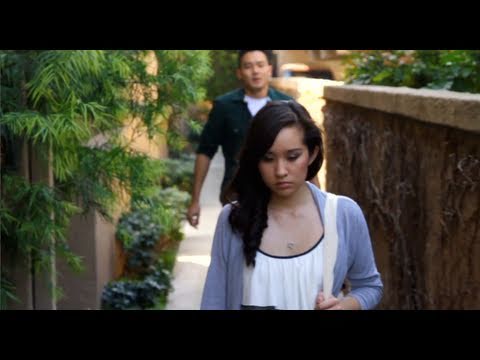 Wong Fu Productions delves deep into relationships with their new short “Strangers, again“. Every relationship goes through stages. Where and how each stage develops is ultimately up to each person. While we always hope for the best, we often can’t avoid the inevitable. Here’s a synopsis of the short:

Josh (Phil Wang) and Marissa (Cathy Nguyen) are at a crossroads and their future is uncertain. Josh guides us through each stage of the relationship as it formed and as he predicts it will end up as.

The most unfortunate fact about a relationship that doesn’t work out, is the inevitable path both parties are on to become strangers. Many relationships follow a general path, through a set of different stages, one that brings two strangers together, takes them through a period of deep emotions and meaningful experiences, then returns them to where they began.

I don’t claim that the story is that original. It’s a look at the rise and fall of a relationship. But I hope that the way in which it is told is what makes it unique. I wanted Josh to break the third wall and address the audience. I wanted him to tell the story from different stages and therefore from different time periods. While the narrative is linear, Josh speaks from the past, present, and future, so his commentary is jumping around. I wanted to do this because it sort of made him self aware of what was to become of the relationship. It’s like going back in time and telling yourself, this is what’s going to happen to you two, and also predicting what will happen in the future. Josh tells his story of his relationship from an omniscient position, something I’m sure we wish we could all have in real life, but is only possible in a scripted video.

Josh is still affected by the passage of time. Certain lines were edited and shot in a way to show that our brain picks and chooses what it wants to remember. Short lines and quick cuts show that he only remembers the gist of what was said. Missing lines show that he’s forgotten. And since the entire topic is coming from the angle of being very technical, the scenes are presented in a way that we give just enough information to push the story along. Like data.
Scenes and settings were repeated (even exact shots) to contrast how their relationship had changed. When their environment stays constant, it’s easier to see how the subjects have become or act differently.

The ending. Originally, the short was going to have a happy ending. The apology at the car was going to be real, and everything would be resolved. I thought the audience wouldn’t want to have a sad ending, even though that’s what I really wanted. After watching a movie called “Blue Valentine”, I was reassured that a sad ending could be better, and so I went to rewrite the ending. The way I see it, and hopefully it’s clear in the final, Josh never ran to stop Marissa in the car. They never had that conversation of him saying sorry and that “everything will be ok”. When we reveal that Josh was just standing there and watching her leave, he was imagining the whole apology, and in reality did the very opposite, he let her drive away upset. This indicates that it really was the beginning of their end, and everything he predicted would probably happen.

The final scene at the dinner table actually wasn’t part of the original script. It was added to give more insight into how Josh and Marissa’s relationship really was. Since, as noted, most of the scenes were executed concisely to reflect the technical angle, I felt we didn’t really understand Josh and Marissa on a deeper level. Their conversation served two purposes, to show how their feelings were changing and leading to their separation, while also giving closure and hope to their future. Just right to end the short.

Behind the scenes of Strangers, again by Wong Fu Productions