The 2012 Vancouver Asian Film Festival (VAFF) will take place on November 1-4, 2012, at the Cineplex Odeon International Village Cinemas in Vancouver. Close to 3,000 audience members are expected to attend the four-day festival. The opening film for the 2012 Vancouver Asian Film Festival is the Canadian premiere of DAYLIGHT SAVINGS, the second installment of the SURROGATE VALENTINE trilogy. SURROGATE VALENTINE was 2011 VAFF’s closing film, and attracted a lot of buzz and a sold-out crowd. Lead actors, Goh Nakamura and Yea-ming Chen (who both play themselves in the movie), will be in attendance at the opening. Other films shown during the festival include LOST LAGOON directed by local filmmaker Rob Leickner, the closing night film, WHITE FROG, starring Joan Chen, BD Wong, Harry Shum Jr. (from Glee) and Booboo Stewart (from the Twilight Saga), the South Asian short SECOND BEST, Model Minority, Sunset Stories starring Sung Kang, and Knots. You can get tickets here.

The 2012 Toronto Reel Asian International Film Festival (Reel Asian) will celebrate its 16th annual edition this year with more screenings, international guests and special events as it continues its expansion outside the downtown Toronto core to bring Richmond Hill residents a taste of the best in Asian cinema. Founded in 1997, Reel Asian began as a 3-day event established in response to meet the needs of an existing demand for Asian films in Toronto, and has since grown to a 10-day multi-city annual event attracting over 10,000 people. Reel Asian strives to develop programming that reflects the cultural diversity of Canada and increase public understanding and appreciation of the artistic, social and cultural contributions of those of Asian heritage through film. This year’s festival will take place November 6-11, 2012 in Toronto and November 16-17, 2012 in Richmond Hill to present 60 films and videos from 14 countries including Canada, China, France, Hong Kong, Indonesia, Kashmir, Japan, Malaysia, Singapore, South Korea, Spain, Taiwan, Thailand and the United States.

REEL ASIAN HEADS TO RICHMOND HILL
As part of their continuing initiative to reach new audiences beyond the downtown core, Reel Asian returns to the Richmond Hill Centre for the Performing Arts for its 2nd Annual Richmond Hill weekend film festival. They will be opening with the Canadian premiere of Floating City with Hong Kong veteran director Yim Ho in attendance and closing the uptown festival with Yung Chang’s highly anticipated documentary The Fruit Hunters.

You can get tickets to the 2012 Toronto Reel Asian International Film Festival here. 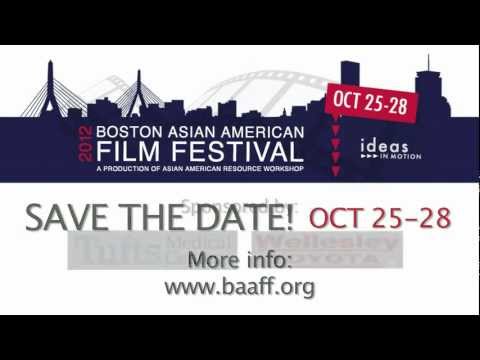 The 2012 Boston Asian American Film Festival (BAAFF) announces a provocative and entertaining program of independent cinema highlighting recent, significant works by and/or about Asian Americans and the Asian diaspora. The festival takes place October 25 to 28, 2012 in Boston at Emerson College’s Bright Family Screening Room in the Paramount Center; in Cambridge at the Brattle Theatre; and in Somerville at the Somerville Theatre. This fourth edition of the festival features more than five Boston/New England premieres, exclusive Q&As with filmmakers and various co-sponsored events around Boston.

The festival opens on October 25th, 7:30pm at the Brattle Theatre in Cambridge with Quentin Lee’s WHITE FROG, a twist on the coming-of-age genre film. Starring some of film and television’s most acclaimed and recognizable actors – including Booboo Stewart, Joan Chen, B.D. Wong, and Harry Shum, Jr. – WHITE FROG is an incisive look at the modern American family centered on a young autistic boy coping with the death of his older brother, and ultimately a universal story of the power of family and friendship in the face of difference and tragedy.

This year, the festival will present two powerful documentaries which each have a unique relevance to the Boston community. BAAFF’s timely Centerpiece Presentation during this primary election season is MR. CAO GOES TO WASHINGTON, a film by acclaimed documentary filmmaker S. Leo Chiang (A VILLAGE CALLED VERSAILLES). The film is a compelling portrait of rookie congressman Joseph Cao who traverses party lines in the pursuit of his ideals and beliefs, and is a refreshing and thoughtful look at how personal choices can affect the community at large. PUI CHAN: KUNG FU PIONEER, the debut documentary film by actress and martial arts master Mimi Chan (best known as the model for Disney’s MULAN), is the ultimate tribute to one of the men who brought Chinese martial arts to the United States. Grandmaster Pui Chan’s Wah Lum Kung Fu Academy and Athletic Association has since become the most important and well-established martial arts system in the United States, and this film hopes to draw in enthusiasts, students and filmgoers alike to a celebration of shared cultural heritage.

The 2012 Boston Asian American Film Festival will feature two specially curated short film programs. FEAR BUFFET is a set of six short films that offer different takes on all things frightful, and REEL FOOD offers eight family-friendly shorts about the lighter sides of life. On Friday October 26, 7pm at the Somerville Theatre, BAAFF will be co-sponsoring a special screening of I AM A GHOST with Boston’s Shudder Fest Horror Film Festival. H.P. Mendoza’s piercing thriller deftly demonstrates the versatility of the Asian-American horror feature film and is the winner of Best New Horror Director by SF Weekly.

Tickets to the 2012 Boston Asian American Film Festival can be purchased at the door or online here. Individual tickets for each film (excluding the Opening Night film) are $10 for General Admission, and additional member and student rates may be available and vary depending on venue. Tickets to the Opening Night film at the Brattle Theatre are $25 for General Admission or $20 for Early-Birds purchased by October 18.

This year’s Opening Night presentation, on Thursday, October 4, is MR. CAO GOES TO WASHINGTON, presented in partnership with the Smithsonian Asian Pacific American (APA) Program at the E Street Landmark Theatre. This film is a character study of then-Rep. Joseph Cao (R-New Orleans), the first Vietnamese-American elected to the Congress and the only Republican to vote for President Obama’s Health Care Reform Bill.

Closing the 2012 DC APA Film Festival will be DON’T STOP BELIEVIN’: EVERYMAN’S JOURNEY and SHANGHAI CALLING on October 6. 2012. DON’T STOP BELIEVIN’: EVERYMAN’S JOURNEY is a documentary following the ups and downs as the seminal band Journey goes on tour with their new lead singer found via youtube.com, Arnel Pineda. SHANGHAI CALLING is a feature film that follows New York attorney Sam (Daniel Henney) as he reluctantly moves to Shanghai
for business. Relying on the help of a relocation specialist (Eliza Coupe), a well-connected ex-pat (Bill Paxton), a clever journalist (Geng Le), and a street-smart legal assistant (Zhu Zhu), Sam might just find his true calling and a way home.

The film festival will be showing films from October 5-7, 2012. Please visit the festival website here for a full line up of film and special events.

channelAPA.com readers, if you’re in the New York area, you have a chance to win a pair of tickets to the 2012 Asian American International Film Festival (AAIFF) in New York. This year films include Yes We’re Open, I Am a Ghost, Pearls of the Far East, Seeking Asian Female, Touch, Viette, Model Minority, and more. The 2012 AAIFF runs July 25 – August 5, 2012 with screenings at Clearview Chelsea Cinemas, Asia Society and Museum, and The Museum of Chinese in America. Bring a friend along and celebrate the 35th annual Asian American International Film Festival.

To win a pair of tickets to 2012 Asian American International Film Festival (AAIFF) in New York:
Send a tweet to “@channelAPA I want to win tix to the 2012 AAIFF in NYC http://bit.ly/MSAOaC”

All entries must be submitted by Sunday, July 13, 2012 at 11:59pm EDT. Limit one (1) entry per person. Winners will be randomly selected from eligible entries and will be notified by direct message (DM) via twitter. Winners can claim two (2) regular screenings at the 35th Asian American International Film Festival (excludes Opening, Centerpiece, Closing and special events). Ticket redemption expires July 18, 2012.

The 2012 Asian American International Film Festival (AAIFF) announced the lineup for the films showing July 25 – August 5, 2012 with screenings at Clearview Chelsea Cinemas, Asia Society and Museum, and The Museum of Chinese in America. In addition to the Opening, Closing and Centerpiece Presentations – SHANGHAI CALLING, KNOTS, and SUPERCAPITALIST, they revealed its full lineup with more than half of the Festival selections made or co-produced in the US. Many are first time directors, including actress turned director Lily Mariye’s MODEL MINORITY, telling the story of an underprivileged teenage girl surviving the treacherous world of peer pressure, drug dealers and dysfunctional families in L.A. There are also a number of returning filmmakers, including H.P. Mendoza’s horror film I AM A GHOST, about a girl trapped in a repetitive routine in Victorian times. And Rich Wong’s raunchy new film YES, WE’RE OPEN, a sharp-witted comedy about a modern couple testing their boundaries of love, sex and honesty.

Other films of note include Pearls of the Far East, Seeking Asian Female, Touch, Viette, and plenty of shorts. You can get tickets here before screenings are sold out.