Asian Film Festival of Dallas (AFFD) celebrates its 12th year of bringing our ever-growing audience films that often cannot be seen on the big screen outside of their countries of origin. For one week each summer (July 11-18, 2013) at the Angelika Film Center in Dallas, TX, festival-goers and filmmakers escape the Texas heat with a variety of feature films and shorts, from all genres around the globe.

Other films of note include Seeking Asian Female and Graceland.

During a sweltering summer in New York City, 14-year-old Mister’s hard-living mother is apprehended by the police, leaving the boy and nine-year-old Pete (Ethan Dizon) alone to forage for food while dodging child protective services and the destructive scenarios of the Brooklyn projects. The coming of age story follows two inner city youths as they fend for themselves. Faced with more than any child can be expected to bear, the resourceful Mister (Skylan Brooks) nevertheless feels he is an unstoppable force against seemingly unmovable obstacles. But what really keeps the pair in the survival game is much more Mister’s vulnerability than his larger-than-life attitude.

The Inevitable Defeat of Mister and Pete is a beautifully observed and tremendously moving film about salvation through friendship and the way transformation sometimes can happen just by holding on long enough. Director George Tillman, Jr. draws indelible performances from a fantastic cast, which includes Jennifer Hudson, Anthony Mackie, Jeffrey Wright, Adewale Akinnuoye-Agbaje, and Jordin Sparks, all led by Skylan Brooks and Ethan Dizon.

The Inevitable Defeat of Mister and Pete Trailer

On the Canadian TV show George Stroumboulopoulos Tonight, Jackie Chan talked about his best story ever: for a young martial arts performer, getting to act opposite Bruce Lee was a huge honor – and Jackie Chan got the chance on the set of ‘Enter the Dragon’. But things didn’t exactly go according to plan. When Bruce accidentally hit Jackie in the head, he felt awful. This allowed Jackie to spend a little quality time with his idol.

Jackie Chan Picks A Fight With Bruce Lee… And Loses 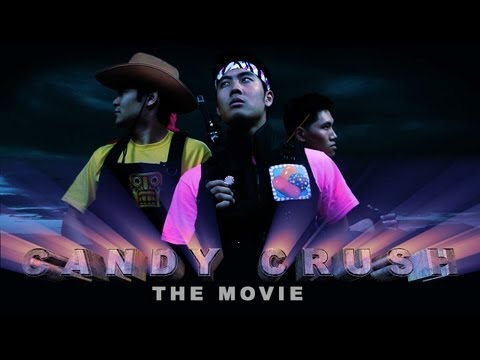 Ryan Higa created a movie trailer dedicated to all the Candy Crush and other mobile game addicts out there! He plays the leads role in “Candy Crush The Movie,” where people are addicted to games like Candy Crush, Fruit Ninja, Angry Birds, Temple Run, and Draw Something. The more likely you are to stay in the world the more likely you are to be imprisoned. Ryan and his friend are here to save those addicted. Watch til the end for a bonus sneak peek.

channelAPA.com has access to some of this summer’s hottest movies. Today, we’re giving away passes to Man of Steel in San Francisco. If you’re in the San Francisco Bay Area, get ready to win tickets to this summer blockbuster.

Here’s more about the film:

Born Kal-El of Krypton, raised Clark Kent on Earth. What world does he belong to? What world does he fight for? Those are the questions confronting Superman, and the choices he makes will determine the fate of the planet he has always called home.

A young boy learns that he has extraordinary powers and is not of this Earth. As a young man, he journeys to discover where he came from and what he was sent here to do. But the hero in him must emerge if he is to save the world from annihilation and become the symbol of hope for all mankind.

“In the world of Super Heroes, Superman is the completely uncompromising figure who exists to represent the best that all of us can be,” director Zack Snyder states. “He is the ideal; he’s what we strive for, that magical, golden god, the kind of icon that has extended beyond the comics world and into all of popular culture.”

Created by writer Jerry Siegel and artist Joe Shuster and first appearing in the comic book Action Comics #1, published on April 18, 1938, Superman quickly became a cultural phenomenon, winning fans around the world in live-action and animated form in nearly every known entertainment medium. In feature films, TV shows, radio, video games, social media and literature, he has battled some of the greatest villains of all time.

See below for details on how to win tickets. You can also buy tickets now at Fandango or movietickets.com

channelAPA.com is giving away tickets to an advanced screening for the film in San Francisco on June 12, 2013 at 7:30pm. Seats are first come first serve. To enter, simply tweet us on twitter with:

@channelAPA I want to go to an early screening of #ManOfSteel in San Francisco http://bit.ly/19Zaftl #SFMOS

and fill out this form here.

All entries must be submitted by Tuesday, June 11, 2013 at 7:00pm PST. Limit one (1) entry per person. Winners will be randomly selected and will be notified by direct message (DM) via twitter. Open to US Residents only. Good luck!

Steve Chong (played by Stanley Wong) is a failure. Every time he screws up he writes it down on a note card and pins it up on his wall. It’s not long before his failures run floor to ceiling. The final card is placed when he gets fired by his own cousin and ruins his best and last chance with Alice, his dream girl from work, by turning down her offer to cheer him up with a wild weekend out at a remote lake house. As he covers the last bare patch on his entire wall of failure, he realizes that his life is over and it is time to die.

But first, he calls up his three estranged friends and invites them out to his family’s lake house for one final weekend of relaxation and intoxication. John is wrestling with the idea that he’ll have to shave off his infamous beard in order to get a job, Tom is busy juggling all the women in his life, and Chris is struggling to get over the girl that Tom stole away from him long ago. Despite their differences, the four estranged friends meet at Steve’s apartment and head out to the lake-house and go on a drinking rampage as they stumble across Steve’s dark secrets. When the girls that Steve turned down earlier show up, chaos breaks loose and no one can predict exactly what Steve has planned.

Steve Chong Finds Out That Suicide Is a Bad Idea Trailer

More about Stanley Wong
The film stars Stanley Wong, who has worked on major feature films in various positions from electrician, to assistant editor, to being in front of the camera. He directed various short films that have gone on to win awards and makes
Internet videos for his youtube channel that has over two million views attached to it. If you keep your eyes
peeled you can see him playing the token Asian character in 21 Jump Street (2012), Pitch Perfect (2012), and Now You See Me (2013). He currently lives in Los Angeles struggling to pay rent.