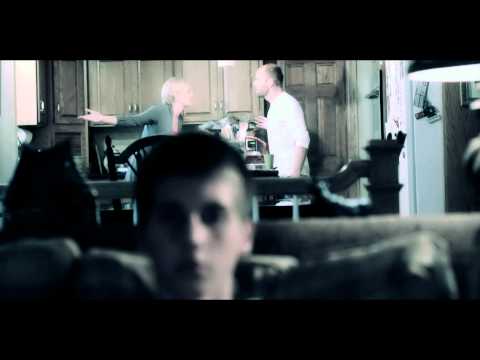 Rapper Lil Crazed goes down the poetic route for his piece “Staring At Nothing”. It’s a powerful video speaking about domestic violence/divorce and the effect on children. What goes through the mind of a child when they need to witness fights between his/her parents? Although the piece is not about his own life, Lil Crazed created a thought provoking message from the kid’s perspective.

Listen to more Lil Crazed: Party All Night, Direction, Lost a Fan, Just My Type, I Do This, Galaxy, Uh-Oh, Remember Me, Super Dope, Drop, First Aid, The Good Life and Put It On Ya.

Staring At Nothing by Lil Crazed

Lyrics to Staring At Nothing by Lil Crazed

and here i am, yet again,
staring at nothing but a reflection,
the silence that’s in the air causes an annoying hum in my ear that’s almost too loud to bear, how ironic,
and the cold in the room consumed by my body is confused, how am i getting heated over here? how ironic,
i stand here contemplating what i’ve accomplished,
trying to process the contents of my life and the paths i’ve taken,
the frowns overshadowed by it’s upside down rival,
so the people that surrounds me are mistaken,
they think i’m happy, but the smile lies,
how can they hear if all my tears come from silent cries?
prior ties have been cut off, because of i,
now if you put “i” between prior ties, you get priorities, but i have none,
and that’s the same way i feel about my life, i don’t have one,
but things were different once upon a time,
my parents had a child and the son (sun) would shine
my father threw me softballs while i was hitting from the plate
my mother taught me manners while she placed dinner on the plate
life was great,
but then all of sudden things began to change,
instead of softballs, my father began throwing lamps,
lights flying, i felt like i was in a rave,
instead of manners, my mother used words like “f*ck you” “piece of sh*t” and “damn!”
things i shouldn’t hear at my age,
words i was taught not to use were exchanged constantly,
and honestly, i was confused how something so promising evolved into something so demolishing,
the love between them started to depart farther and farther out
their arguments got worse, to the point they forgot what they were arguing about,
and as those increased, their love did the exact opposite,
they became another statistic of the divorce rate and did the obvious,
but it wasn’t so bad for them because they both started a new family,
and here i am, in between, forced to pursue happily,
my little half brother on my mom’s side is so cute and chubby,
my little half sister on my dad’s side is so amusing and bubbly,
but who am i? the forgotten child? damn that,
i’m the sole reason my parents have to remain in contact,
if and when i’m no longer in existence, the same would happen to their bond,
disappear, poof, gone,
fake smiles, they’ve got to put on whenever they get connected,
fake smiles, it must be genetics,
because i put on a fake smile just about everywhere i go,
just about everywhere except when i’m alone at home,
when i look into the mirror and see my reflection,
here i am, yet again, staring at nothing

“Say You Heard My Echo” is the story of three Asian American women in New York City a decade after 9/11 as they seek answers to life’s questions from female religious deities. With choral poems, prayers, activist folk songs, and raps, the play weaves together the characters’ struggles with survivorship and faith and their intimate relationships with Mary Magdalene, Guan Yin, and Aisha. Rendered with humor and humanity and in the fast-paced style of spoken word poetry, Say You Heard My Echo explores what the word “sacred” means in today’s world. What connects a Catholic burlesque dancer who survived the Twin Towers, a Buddhist Iraq war veteran and hip hop emcee who returns home, and a Muslim librarian whose family suffers detention and interrogation?

Listen to more Kelly Zen-Yie Tsai: Love is Easy…Relationships are Hard, Today, Kindness Over Genius, Further She Wrote, Black, White, Whatever and Real Women I Know. 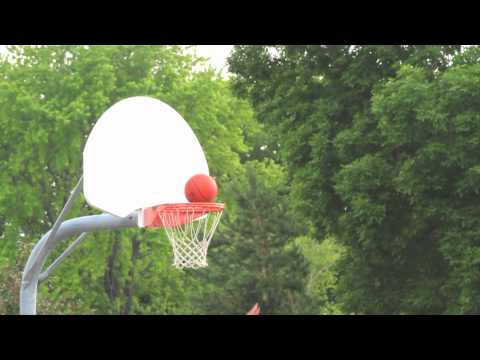 Spokenword artist Bao Phi continues the trilogy of pieces about Jeremy Lin. Using sports analogies, he illustrates the visibility that Jeremy Lin gained himself as well as given to Asian Americans. He also dives deeper into Asian American issues even as Jeremy Lin was rising in the spotlight during Linsanity. In the face of all the negativity and hater, Lin played on and so should you. You can be anything that no one thinks you can be. From obscurity to global phenomenon, you never know what lies in your future.

ARTIST STATEMENT: This poem and video was originally conceptualized at the height of Linsanity as one in a trilogy — the first, “Lin. Sanity” by Giles Li and Ash Hsie, was posted last week. “467” alludes to the rank Jeremy Lin had in the NBA prior to Linsanity. When Jeremy Lin went down with an injury, the whole plan was put indefinitely on hold. The recent (and baffling) vitriol that sports media outlets have thrown Jeremy Lin’s way escalated the timeline. Thank you to all involved in making this video, and keep an eye out for another video in the trilogy

Also see Lin. Sanity. by Giles Li as part of the trilogy. 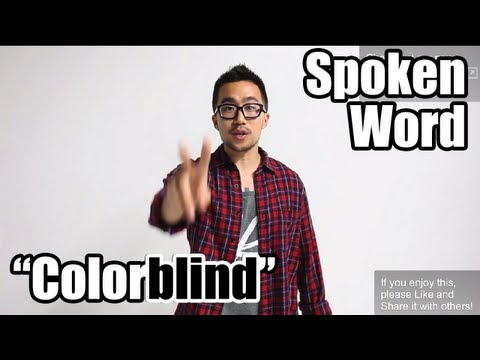 Rapper/spoken word artist Jason Chu released a piece in response to the La Jolla Playhouse casting only 2 Asian-Americans in the play “Nightingale” set in ancient China. It’s part of the trend known as “no Asian faces on TV”. He references plenty of shows without Asians as well as roles that Asian are relegated to. Progress is made by opening our eyes – not being blind.

Lyrics to Colorblind by Jason Chu

I hear “nothing’s more American than immigrating in
“Working hard is more important than the color of your skin”
But if that’s true, why are the faces that look like me
Always involved in takeout, kung fu, or exotic villainy?
I mean, we wear the same clothes and we do the same things
And we talk the same way – but it was never a real dream
For me to be Friends with Rachel, Joey, or Ross
And “Jason Chu” was not the answer to the question, “Who’s the Boss?”
Even on Cheers, where everybody was supposed to know my name
I never heard a Chu, Nguyen, Kim, Loke, or Chang
So I concluded that Asian faces are only right
If we’re talking about rice, or a high-tech device
I mean, I just saw the Dark Knight Rise
And I cheered every time that I saw an Asian face – twice
This is why we don’t win: the systems that we’re in
If we build separate communities, we’re viewed as aliens
But if we try to play along, we have no hope of blending in
They’ll never let John Wayne be played by John Kim
But The Airbender was Noah Ringer, and Goku was Justin Chatwin
And the whole cast of Akira was gonna be played by white men
But I have never seen a role with a European name
Be filled by an Asian with the excuse “we cast for talent, not for race”
So the La Jolla playhouse can say anything they want
In the end, I don’t see action, so I conclude it’s just a front
For the same attitude that I’ve always seen out there
Because “color-blind” is just a nicer way to say “we don’t care” 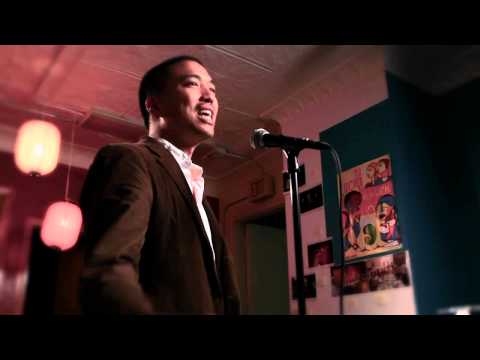 Spokenword artist Giles Li delivers an eloquent piece on how Jeremy Lin has transformed the way society views Asian Americans and how Asian Americans view themselves. He dwells on his own experience growing up Asian American in the USA being bullied and harassed. Giles draws parallels between his childhood, his career on the mic, and what Jeremy Lin probably experienced himself. It’s an introspective look at life as an Asian American.

ARTIST STATEMENT: This poem and video was originally conceptualized at the height of Linsanity as one in a trilogy. The other two poets did in fact write amazing poems about the same player, but when Jeremy Lin went down with an injury, the whole plan was put indefinitely on hold. The recent (and baffling) vitriol that sports media outlets have thrown Jeremy Lin’s way escalated the timeline, and this is still just the first of three poem videos that will be released. Keep your eyes peeled. 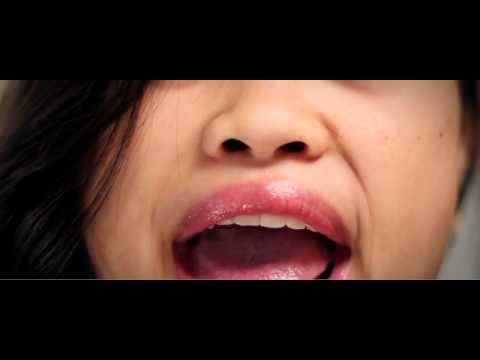 Spoken word artist Ruby Ibarra released her latest piece “Beyoutiful”. It directly addresses society and media’s sense of the beauty standard. She breaks down everything from height to to clothing to eating disorders to meet this unattainable standard. Women do things like try to reach it such as cosmetic surgery and makeup. Instead of meeting what is shown in magazines and TV, Ruby suggests that you let your “sister” know that she’s beautiful in her own way and doesn’t need a disguise to reach your dreams.

Lyrics to Beyoutiful by Ruby Ibarra

I wanna be 5’5″ with brown eyes
Big breasts, small waist, and nice thighs
‘Cause I only see myself through your eyes
So I don’t eat, but I’m fed with more lies
So I try and I cry and I purge and I vomit
The urge to be honest with no courage to just stop it
I see society’s ideals, so I feel I need a shield
Skipped another meal so I can keep my appeal
But my skin starts to peel so I can no longer feel
What it means to be real so I fall on these heels
‘Cause who cares about the frame that holds my diploma?
Or the train of my thoughts that molds my persona?
Or the way I’ve been brought up to be as a grown up?
But it’s the body’s frame, trained, by the way of society’s boner
‘Cause I have to be 5’10” and in trend
And only feel good about the clothes that I’m in
Experience defined by the beds I’ve climbed in
Shadowed by a mask that I’m forced to hide in
Of course I lie then, thinking each night I need to lie beside men
Drinking each time my pride inside is rising
Trying to find me but I’ve lost what I’ve been
Who would’ve thought that it’s me that I fought each time, and
All at the cost of what I’ve become
When I look into the mirror I feel numb
Staring back at me are supersized thighs, empty, hollow eyes
Heart full of cries, brain filled with lies, body materialized, so I
Nip and I tuck, I snip and I pluck
Lips covered in muck, hips controlled by these cuffs
Can’t stick to my gut, I’m fixed and I’m stuck
I’m tricked by this bluff ’till I’m sick and throw up
This sh*t is corrupt, I’m forced to grow up
Can’t fit in this stuff, this change is abrupt
Stick thin ain’t enough, must be thick with C-Cups
Tears drip as I rub off this make up that’s rough
Society’s planted silicones so we end up being sickened clones
Stuck in this cyclic flow of afflicted bones
So don’t let your sister know that she’s worth more than lipsticks and combs
Or that her blisters will show everytime she vomits at home
When your parents aren’t home and she’s all alone
Only seeing what these magazines and TV’s have shown
See I wanna be a Cover Girl, so I cover the real girl
But if you peel off these pearls, under’s a concealed world
Of a girl with hopes and dreams, brighter than things that gleam
Knows that she’s a queen, knows what her life means
‘Cause I can only be 5 feet with slanted eyes
Geek and kinda shy, small feet and crooked smile, just me with NO DISGUISE!