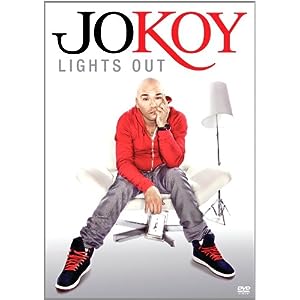 From filling clubs and concert venues across the nation to being seen weekly as a regular guest on “Chelsea Lately,” Jo Koy returns to COMEDY CENTRAL with an all-new original one-hour stand-up special. The world premiere of “Jo Koy: Lights Out” debuted Sunday, April 1, 2012.

Koy is back with a new special filled with hilarious stories about his life and family. Filmed at the Alex Theatre in Glendale, CA, Koy explains why he feels sleep is a near-death experience, why his son will always associate the image of his naked father with earthquakes and offers a helpful tip for escaping the agony of parenthood. Newcomers will be engaged by Koy’s animated style and fans will find plenty of laughs from the comedian they love.

“Jo Koy: Light’s Out” extended and uncensored DVD will be released on April 3, 2012 with 15 minutes of material not included in the broadcast. The bonus features include “DJ Josephine,” which follows Koy home to Las Vegas where he visits his mother’s radio show and the site of his very first stand-up performance; and “Jo Koy: All Access” where viewers get an intimate backstage pass to the show with Koy and his friends.

You can get the video on

Those bar : Jo Koy -Jo Koy’s mother would give the worst advice.

More about Jo Koy
Koy’s first COMEDY CENTRAL special, “Don’t Make Him Angry,” debuted in 2009 and is currently available on DVD. He has also been featured on the network’s series “Live at Gotham,” “Premium Blend” and “COMEDY CENTRAL Presents.” He has appeared on “The Tonight Show with Jay Leno,” “Jimmy Kimmel Live,” “Last Call with Carson Daly,” “BET’s Comic View,” “Jamie Foxx Presents: Laffapalooza,” and various episodes of VH1’s “I Love the 70’s,” “I Love the 80’s” and “I Love the 90’s.” Koy has toured as part of Carlos Mencia’s “Punisher Tour” and is a regularly featured comedian at the world famous Improv. He tours the college circuit nationwide and performs in comedy clubs both in the US and internationally.