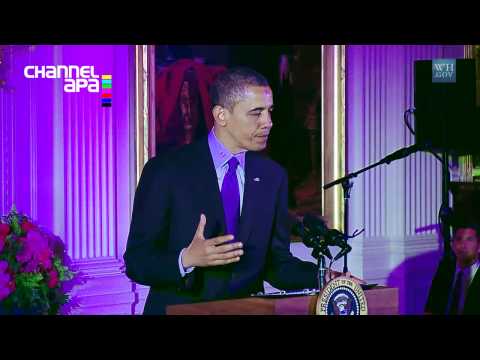 President Obama delivers remarks an the APA Heritage Month celebration at the White House. In his remarks, the President highlighted the contributions of generations of Asian Americans and Pacific Islanders who, in his words, “helped build this country, and helped to defend this country, and to make America what it is today.”

THE PRESIDENT: Welcome to the White House, everybody. And thank you, Joan, for the introduction. And I want to thank everybody who’s here — the incredible warmth of the reception. A sign of the warmth is the lipstick on my collar. (Laughter.) I have to say I think I know the culprit — where is Jessica Sanchez? (Laughter.) Jessica — it wasn’t Jessica. It was her aunt. Where is she? (Laughter.) Auntie, right there. Look at this. (Laughter.) Look at this. I just want everybody to witness. (Laughter.) So I do not want to be in trouble with Michelle. (Laughter.) That’s why I’m calling you out right in front of everybody. (Laughter.)

We are here today to honor the incredibly rich heritage and contributions of Asian Americans and Pacific Islanders. And there’s no better example of that diversity than the people who are in this room. We’ve got members of Congress; we’ve got members of my administration; we’ve got lots of special guests and talented performers.

And every day, we’re reminded of the many ways in which Asian Americans, Native Hawaiians, Pacific Islanders have all contributed and enriched our nation throughout our history. Obviously for me, I don’t have to look any further than my own family. I’ve got my brother-in-law here, Konrad, who is — (applause) — Konrad Ng, who’s heading up the Smithsonian Asian American Center — it probably has a longer name than that. (Laughter.) My sister, Maya; their beautiful daughters — my nieces, Suhaila and Savita.

I can think back on my college years when my roommates were Indian and Pakistanis, which is how I learned how to cook keema and dal. (Laughter and applause.) Very good. And of course, I can dig back into my own memories of growing up in Hawaii and in Indonesia. And so certainly it’s been a central part of my life, the entire Asia Pacific region.

But it’s more than food and family — because generations of Asian Americans and Pacific Islanders helped build this country, and helped to defend this country, and to make America what it is today. It’s a history that speaks to the promise of our nation — one that welcomes the contributions of all people, no matter their color or their beliefs, because we draw from the rich traditions of everybody who calls America home. “E pluribus unum” — out of many, one.

And the artists joining us today exemplify that creed. So we’ve got performers like Karsh Kale, who fuses the best of East and West, mixing eclectic beats with the sounds of his heritage and creating music that’s distinctly his own — that’s a trait, obviously, that’s distinctly American. We’ve got musicians like Paula Fuga and John Cruz, whose work represents the spirit of my native Hawaii and reminds us that we’re all part of the same ohana. We have authors like Amy Tan, who uses her own family’s immigration story to trace the stories of others. She makes out of the particular something very universal.

We value these voices because from the very beginning, ours has been a nation of immigrants; a nation challenged and shaped and pushed ever forward by diverse perspectives and fresh thinking. And in order to keep our edge and stay ahead in the global race, we need to figure out a way to fix our broken immigration system — to welcome that infusion of newness, while still maintaining the enduring strength of our laws. And the service and the leadership of Asian Americans and Pacific Islanders have proved that point time and again.

So we take opportunities like today to honor the legacy of those who paved the way, like my friend, the late Senator from Hawaii, Daniel Inouye, the first Japanese American to serve in Congress — and to celebrate the pioneers of this generation, like Congresswoman Tammy Duckworth, one of the first female veterans elected to Congress. (Applause.) And one of my favorite people right now, Sri Srinivasan, who has just been confirmed. (Applause.) Here’s Sri, right here. (Applause.)

I was proud to nominate Sri, and he was just confirmed unanimously to become the first South Asian American federal appeals court judge. (Applause.) I was telling his kids, who are here today, if he starts getting a big head, walking around the house with a robe — (laughter) — asking them to call him “Your Honor” — (laughter) — then they should talk to me. (Laughter.)

In every election, at every board meeting, in every town across America, we see more and more different faces of leadership, setting an example for every young kid who sees a leader who looks like him or her. And that’s a good thing. We’ve got to keep that up. We’ve got to do everything we can to make sure everybody works hard, everybody plays by the rules, everybody has a chance to get ahead — to start their own business, to earn a degree, to write their own page in the American story — that the laws respect everybody, that civil rights apply to everybody. That’s who we are at our best and that’s what we’re here to celebrate. That’s the challenge that I believe we’re going to meet together.

So I want to thank all of you for being here tonight. It is going to be a wonderful gathering. And from Michelle and Malia and Sasha — and Bo — (laughter) — thank you all for the incredible contributions that you’re making each and every day.