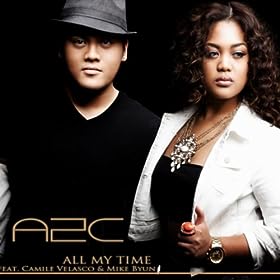 Powerhouse R&B/soul duo A2C, composed of a brother and sister team (Allan Troy and Cheesa Laureta), is about to take the US by storm. For their debut single “All My Time”, they team up with former American Idol contestant Camile Velasco x rapper Mike B. The track has a throwback feel with a silky smooth vibe. It’s what love songs use to be like. You can get the single on

Their debut album “All For Love” is set for release in September of 2011. It talks about every aspect of love from sweet romance to heartbreak and every step in between. Keep your ears open these two put on a show that you won’t want to miss.

All My Time by A2C x Mike B x Camile Velasco

Raised in the island paradise of Hawaii, A2C began performing in various venues from dilapidated houses to some of the biggest stadiums in Hawaii and the Philippines while creating a name for themselves. They have embarked on several tours in and out of the United States and have opened for numerous acts, including Filipino superstars Sharon Cuneta and Martin Nievera.

Realizing the potential they had, A2C decided to take their project to a more adequate environment, Los Angeles, CA. Upon moving to LA they were able to fulfill their true talents and began songwriting, recording and producing their own songs. They are influenced by a very diverse range of music, from the obvious r&b and pop, to soul, gospel and even classical piano, which is reflected in their songwriting.

After taking a brief hiatus from performing to focus on song writing, A2C has reemerged with a fresh look and sound and is currently setting up a tour to promote their debut album.