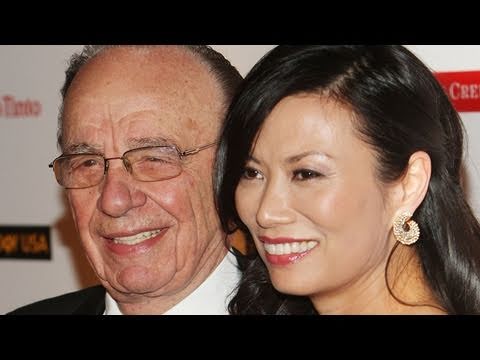 Wendi Deng Murdoch, the third wife of media tycoon Rupert Murdoch, is trending after she leapt to her husband’s defense—literally—during his testimony before the British Parliament. As the chairman of the News Corporation was answering questions about the phone-hacking scandal that is rocking his media empire, a protester (Jonnie Marbles) burst into the hearing room and tried to “pie” him. The man rushed Rupert Murdoch and threw a plate of white shaving cream as the media mogul testified before British lawmakers. Mrs. Murdoch (wearing the pink suit), a volleyball enthusiast, sprung into action, slapping the assailant as he lunged at his target. (She’s got good form on that spike.) No one was injured. The pie thrower was arrested and the hearing resumed about 10 minutes later once order was restored.

The increase publicity will help visibility of the film she helped produce “Snow Flower and the Secret Fan“. The pie man will not be her lao tung for sure. Also check out some of the interviews with people behind the film.

Raw footage of the attack from PBS