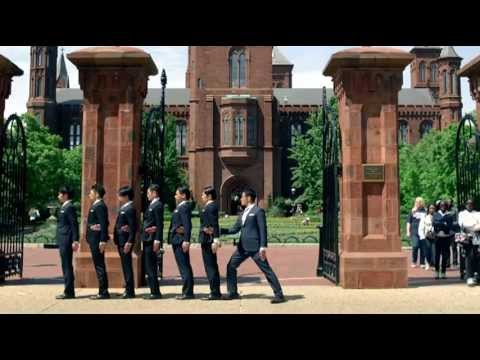 WORLD ORDER first captured the international attention with the release of their music videos on Youtube — the sight of seven suited Japanese men dancing robotically against prominent Tokyo scenes garnered a huge reaction. Their latest video takes place at the nation’s capitol in D.C. The new single and video IMPERIALISM builds on the group’s mission to prompt reflection contemporary society, working styles, global culture, and images of modern Japan. Provocatively shot in Washington D.C. — against backdrops of American sights like the US Capitol building and Union Station. Spontaneous moments from filming are kept as is for the video – WORLD ORDER’s expressive vision.

The new music video for IMPERIALISM is a continuation from the earlier Korea-set piece, Permanent Revolution. Instead of Asia, the IMPERIALISM video was shot on location in a modern world empire — Washington D.C., USA. Characteristic restraint and a solemn melody are coupled with a humorous performance, expressing yet again the meta-message of WORLD ORDER. Founder and leader of the group, Genki Sudo, says about the song, “It’s our first English-language release, but the message is the same as our other Japanese-language songs. We sing about the human family and the situation of the world.”

Lyrics to Imperialism by World Order

Let’s make a paradise
When I was waiting for sunrise
This is what I wanna visualize
Together, we realize

Concession and the plantation
Our dreams, under the control, It’s the,
End of Imperial history, Now
Let me show you the ocean of the prime