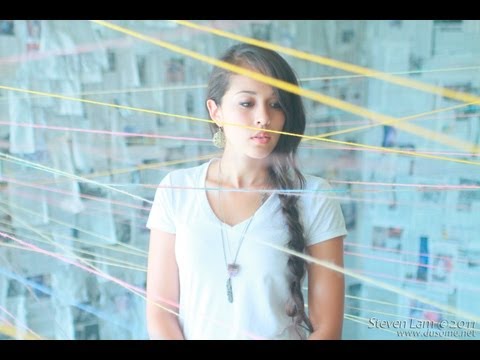 Singer Kina Grannis released a music video video “Without Me” off her Stairwells album with the help of director Ross Ching. (Previously, the pair worked together on the music video for Valentine.) In their latest collaboration, Kina Grannis starts in an empty room with newspapers and yarn. As the song progresses, you can see the words on the newspaper clipping as Kina posts them one by one on the walls of the room. Then she connect yarn to all the phrases on the wall with crisscrossing yarn everywhere. The atmosphere created in the video is much like that of the film “A Beautiful Mind”. The video illustrates the mental anguish from the lyrics of her breakup song. You can get the track on

Listen to more Kina Grannis: Make It Go, In Your Arms, The One You Say Goodnight, Valentine and My Time With You.

Watch more music videos by Ross Ching: Missing Piece by David Choi, Valentine by Kina Grannis, The Camel Song by Clara C, Without You, and Offbeat by Clara C.

Without Me by Kina Grannis

Lyrics to Without Me by Kina Grannis

But if you care I’m open
And if you need I’ll stay a while
So you can get this off your chest
Prove to yourself without me is best
I don’t believe you’d rather go on without me
That you think this is what you need
That you’re better, that you’re better without me

Now you’re coming around here doing what you do
You’re making this hard, me living without you
Don’t you see that it’s simple
Don’t you see it’s so obvious
It should be you and me constantly, I can’t let you go