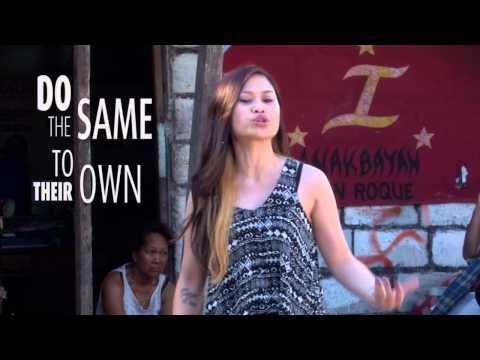 Spoken Word artist/rapper Ruby Ibarra released her latest piece about about the four letter word HATE. She offers an insightful point of view on how hate affects us and others around. Her piece forces you to reexamine you thoughts about society and how hate has been woven in. What is hate? How early in childhood do kids begin to understand it?

Lyrics to Hate by Ruby Ibarra

There is a word that my 5 year old niece doesn’t know exists
It’s something she doesn’t battle with and it’s never escaped her lips
It’s a four letter, one syllable, simple word: HATE
Yet it carries so much historical, political, emotional weight
That ‘s shaped our beliefs, changed what we see, and made us envy
It’s made us blind to truths, to find excuse, caused lies and abuse
So our minds can’t choose, designed so we lose
Lose control of reality, lose trust, and lose ourselves
Like poisonous gas, it wraps around our lungs so we can’t breathe or yell for help
So she asks me, what is hate?
It’s made men turn on each other, cock the gun, and hold at gun point
It’s made scapegoats so we blame folks for our faults while our fingers point
It’s made innocent lives grow closed eyes while enclosed in a mask of lies
By making teenage girls cry because their body size will never suit your eyes
It’s made us wish we were someone else
Forced us into plastic surgeries, erasing cultural history
An urge of ideal imagery, a burglary of our own identity
It’s tricked us into believing that we’re too fat, too ugly, and not white enough
It racially profiles and forced people to sit in the back of the bus
It’s made men call women b*tches who in turn call other women b*tches
It’s burned bridges to the point where we don’t know which is wrong or right
It’s made us colorblind, only seeing black and white
Planting racism and bigotry, promoting racial tensions and fights
Again, she asks me, what is hate?
Its taught 18 year old boys how to use a gun
While on the same fields stands 5 year old children who are taught to shoot someone
It’s made victims of abusive fathers do the same to their own daughters
It’s made men boost their masculinity by exploiting another’s femininity
It’s built glass ceilings, internment camps, nooses, and “not allowed” signs
It’s raised narrow minded babies so maybe they’ll never see past their own kind
It controls the media and schools through propaganda
Teaching us the enemy while we don’t question or raise our hand up
Still, she asks me, what is hate?
It’s caused school shootings, injustice, rape, and genocide
It’s made innocent lives die and innocent mothers and wives cry
It screams of words: “F*CK YOU,” “B*TCH,” “STUPID,” and “HOMO”
It’s what makes us laugh when we say “that’s gay” when we know its wrong though
Its written Jim Crow Laws, Indian Removal, and Asian Exclusion Acts
It’s enslaved our past while it engraves a cage in our path
It’s made categories of inferior and superior
Making us wish for another exterior
Making us unable to look into the mirror
It’s planted anger, depression, and fear
It’s 500 years of slavery and oppression
Parents failing to give their children direction
It’s confessions behind closed doors of elections, that politicians never mention
It’s literacy prevention, no Filipino Veterano pension
It’s stereotypes and 1-dimension, character inventions
All being f*cked by White Supremacy’s erection
So what is HATE?
It’s something my 5 year old niece can’t feel
For her it’s a man-made social construct, so it isn’t real
It’s an empty word, insignificant, powerless, and nameless
Now I’m just waiting for the rest of the world to follow so we don’t know what hate is
Let’s no longer know what hate is!