Time to Gleek out! and Learn 10 Rules to Finding Inspiration, Happiness, and the Real You from Glee’s Jenna Ushkowitz. She inspires fans to invoke positive thinking into everything they do.

Fans of the breakout musical series will flock to Ushkowitz’s heartfelt and practical guide on how to be your true self, gain self-esteem, and find your inner confidence. In Choosing Glee, Jenna shares her life in thrall to performance, navigating the pendulum swing of rejection and success, and the lessons she learned along the way. Included are her vivid anecdotes of everything before and after Glee: her being adopted from South Korea; her early appearances in commercials and on Sesame Street; her first Broadway role in The King and I; landing the part of Tina on Glee; her long-time friendships with Lea Michele (a.k.a. Rachel Berry) and Kevin McHale (a.k.a. Artie); and touring the world singing the show’s hits to stadium crowds. Peppered throughout are photos, keepsakes, lists, and charts that illustrate Jenna’s life and the choices she has made that have shaped her positive outlook.

Choosing Glee will speak to the show’s demographic who are often coping with the very stresses and anxieties the teenage characters on Glee face. Think The Happiness Project for a younger generation: With its uplifting message and intimate format, teens can learn how, exactly, to choose glee.

More about
Jenna Ushkowitz plays Tina on the huge FOX hit, Glee. She started her acting career at the age of three and made her first appearance on Broadway’s The King and I at the age of nine. Jenna returned to Broadway for Spring Awakening and has been on Glee since the show’s inception. 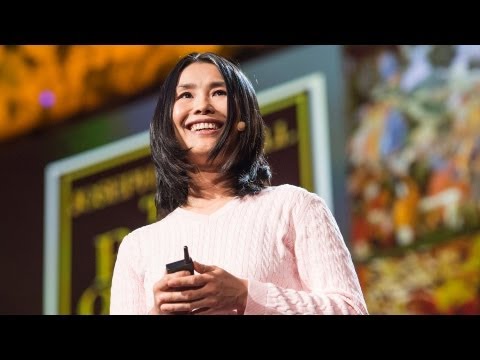 What happens when a dream you’ve held since childhood … doesn’t come true? Lisa Bu grew up in China with tiger parents, who wanted her to have a safe and stable career as an engineer. However, she had her own dreams to be a Chinese opera singer, but her dream was shattered. She turn to books to create a new dream, which led her to move to the US. As Lisa Bu adjusted to a new life in the United States, she turned to books to expand her mind and create a new path for herself. She shares her unique approach to reading in this lovely, personal talk about the magic of books.

“I have come to believe that coming true is not the only purpose of a dream. Its most important purpose is to get us in touch with where dreams come from, where passion comes from, where happiness comes from.” – Lisa Bu

How books can open your mind by Lisa Bu at TED

More about Lisa Bu
Born and raised in Hunan, China, Lisa Bu has been with TED since 2011. Before that, she spent seven years as a talk show producer and a digital media content director at Wisconsin Public Radio. She’s also a computer programmer, with a PhD in journalism and an MBA in information systems from the University of Wisconsin-Madison, as well as a BA in Chinese from Nanjing University in China.

With themes of fear, racism and forgiveness that are as relevant today as they were seventy years ago, Jan Morrill’s debut novel “The Red Kimono” is gripping audiences from coast to coast. Taking readers deep into the lives of two young Japanese Americans and their African American friend as they experience dramatic events of World War II, The Red Kimono offers a compelling reality check for all.

A glimpse back at 1940s America will send chills down the spines of many who lived through it. As the United States suffered crippling societal fear and racism, a string of geopolitical events further deepened tensions. In a ground-breaking debut novel by Jan Morrill, the fictional story of three young Americans caught up in troubles of the era is vividly depicted for a twenty-first century audience. The Red Kimono travels deep into each of their lives as they navigate and pay for the problems inflicted upon them.

In 1941, racial tensions are rising toward Japanese-Americans in the California community where nine year-old Sachiko Kimura and her seventeen year-old brother, Nobu live. When Japan attacks Pearl Harbor, tensions erupt and Sachi witnesses three teenage boys taunting and beating her papa in a park. She especially remembers the colored boy with hazel eyes, Terrence Harris. When Nobu comes upon the scene, he cannot believe the boys he witnesses beating his father are his friends.

Unbeknownst to Sachi and Nobu, that morning, Terrence’s family received a telegram that his father was killed in the attack on Pearl Harbor. Desperate to escape his pain, he leaves home and runs into two high school friends who convince him the only thing that will help is to “get a Jap.” When they find a Japanese man and beat him up, they do not know it is Nobu’s father.

In the months that follow, Terrence is convicted of manslaughter is sentenced to two years in prison. Sachi and Nobu are sent to an internment camp in Arkansas. Each will change during imprisonment. One will learn acceptance. One will remain in a prison of resentment. And one will seek a path to forgiveness.

Woven with themes of bigotry and betrayal, friendship and forgiveness, treachery and tradition, The Red Kimono takes place in California and Arkansas during World War II and sets a multi-cultural stage that contrasts the lives of those who can and cannot forgive.

As the author explains, her book’s startling themes are still deep-rooted in modern society.

“Fear, racism and forgiveness are as relevant today as they were when this story took place seventy years ago. Though the fear surrounding 9/11 reminded me of that which surrounded Pearl Harbor, I still see ignorance that causes anger, fear, hatred, etc. with regard to differences in politics, religion, culture, class,” says Morrill, whose own mother was a Japanese American internee during WWII. Continuing, “The Red Kimono compares the lives of those who choose to remain closed to those who open themselves to the discovery of our differences.”

You can get the book here.

More about author Jan Morrill
Jan Morrill was born and (mostly) raised in California. Her mother, a Buddhist Japanese American, was an internee during World War II. Her father, a Southern Baptist redhead of Irish descent, retired from the Air Force. Many of her stories reflect memories of growing up in a multicultural, multi-religious, multi-political environment as does her debut novel, THE RED KIMONO, which was published by the University of Arkansas Press in February 2013.

An artist as well as a writer, she is currently working on the sequel to The Red Kimono.

Jan’s award-winning short stories and memoir essays have been published in the Chicken Soup for the Soul series of books and several anthologies. Recently, she was nominated for the Pushcart Prize for her short story “Xs and Os,” which appeared in the Voices Anthology. 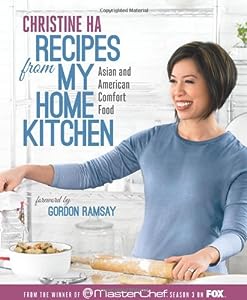 In her kitchen, Christine Ha possesses a rare ingredient that most professionally-trained chefs never learn to use: the ability to cook by sense. After tragically losing her sight in her twenties, this remarkable home cook, who specializes in the mouthwatering, wildly popular Vietnamese comfort foods of her childhood, as well as beloved American standards that she came to love growing up in Texas, re-learned how to cook. Using her heightened senses, she turns out dishes that are remarkably delicious, accessible, luscious, and crave-worthy.

Millions of viewers tuned in to watch Christine Ha sweep the thrilling Masterchef Season 3 finale, and here they can find more of her deftly crafted recipes. They’ll discover food that speaks to the best of both the Vietnamese diaspora and American classics, personable tips on how to re-create delicious professional recipes in a home kitchen, and an inspirational personal narrative bolstered by Ha’s background as a gifted writer. Recipes from My Home Kitchen will braid together Christine’s story with her food for a result that is one of the most compelling culinary tales of her generation. You can get the book here.

Christine Ha talks about her cookbook “Recipes from My Home Kitchen”

Christine Ha is the winner of Season Three of MasterChef. Legally blind, she wants her skill to inspire others with disabilities that anything is possible. She lives in Houston, where she is completing an MFA in creative writing at The University of Houston. 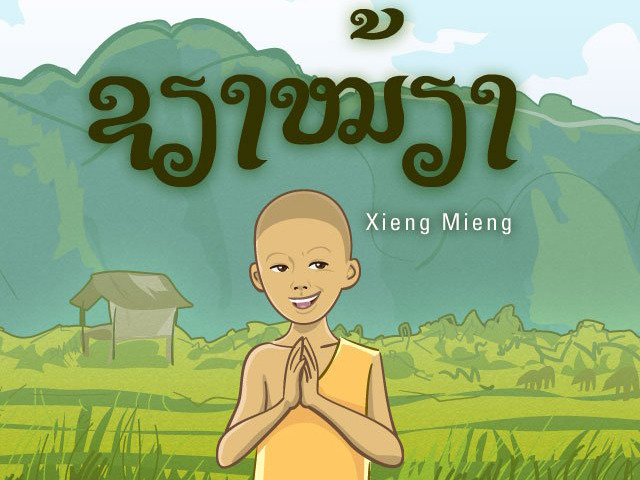 Lao American refugee Nor Sanavongsay is looking to print between 500 to 1,000 copies of his children’s book Xieng Mieng: A Sticky Mess. Here’s more about the story:

Xieng Mieng: A Sticky Mess is the comedic origin story of one of the most beloved folk heroes of Laos. A young monk keeps getting in trouble with the head of the monastery who think the boy can’t do anything right. Finally, the young boy decides to turn the tables with the help of a chicken and a little bit of a sticky snack called mieng. What happens next has become the stuff of legend for over 600 years! This is the hilarious tale of cleverness and ingenuity for children aged four and up. This will be the first of 5 stories in the making. The stories will be in English with some Lao words in English phonetics.

As an established and successful artist and designer, he’s looking to raise $3,000 to print the book in softcover, 6″ x 9″, 32 pages, and black and white. If he can reach his stretch goal of $10,000, he’s doing it in color. (What kid doesn’t want their storybook in color?) Did you know after 40 years since first coming to the US as refugees, there are still less than 40 books by Lao Americans regarding their heritage, their journey and culture. This is a key step to address that.

You can help fund the project here.

(Thanks for the tip Bryan W.)

Help fund Lao Children’s Book: Xieng Mieng Adventures (with a little more funding it could turn into an animated series

Chef Eddie Huang is the thirty-year-old proprietor of Baohaus—the hot East Village hangout where foodies, stoners, and students come to stuff their faces with delicious Taiwanese street food late into the night—and one of the food world’s brightest and most controversial young stars. But before he created the perfect home for himself in a small patch of downtown New York, Eddie wandered the American wilderness looking for a place to call his own.

Eddie grew up in theme-park America, on a could-be-anywhere cul-de-sac in suburban Orlando, raised by a wild family of FOB (“fresh off the boat”) hustlers and hysterics from Taiwan. While his father improbably launched a series of successful seafood and steak restaurants, Eddie burned his way through American culture, defying every “model minority” stereotype along the way. He obsessed over football, fought the All-American boys who called him a chink, partied like a gremlin, sold drugs with his crew, and idolized Tupac. His anchor through it all was food—from making Southern ribs with the Haitian cooks in his dad’s restaurant to preparing traditional meals in his mother’s kitchen to haunting the midnight markets of Taipei when he was shipped off to the homeland. After misadventures as an unlikely lawyer, street fashion renegade, and stand-up comic, Eddie finally threw everything he loved—past and present, family and food—into his own restaurant, bringing together a legacy stretching back to China and the shards of global culture he’d melded into his own identity.

Funny, raw, and moving, and told in an irrepressibly alive and original voice, Fresh Off the Boat recasts the immigrant’s story for the twenty-first century—it’s a story of food, family, and the forging of a new notion of what it means to be American. You can get the book here.

Fresh off the Boat with Eddie Huang and his father