From C to C: Chinese Canadian Stories of Migration is a community-based educational initiative led by Simon Fraser University (SFU) and S.U.C.C.E.S.S. aimed at raising awareness of these social justice issues among youth and the community at large. During a series of 20 video interviews, the film explores the impact of the Head Tax and Exclusion Act on Chinese immigrants between 1923-47 through the reflections of their Chinese Canadian descendents and recent immigrants. Filmed on location in BC and throughout China’s Guandong province, “From C to C” is a moving, and cinematic, tapestry of Chinese Canadian stories of migration. These stories outline the injustices faced by Chinese migrants during the last century, and the little known affects of migration on the families and communities of migrants. The film contrasts these histories with the views and experiences of contemporary Chinese Canadian youth, leading us to reflect on the meaning of exclusion for those who experienced it, as well as for those who did not. By calling attention to the diverse and transnational nature of contemporary Chinese Canadian identities, the film promotes an inclusive vision of Canada that values members of all communities as global—rather than solely national—citizens.

The film also celebrates how Chinese Canadian pioneers helped to build Canada. SFU’s Teaching and Learning Centre has won a Leo Award for best one-hour documentary program for this documentary.

The clip below is an interview selection with Bill Wong of Modernize Tailors (est. 1913) in Vancouver’s Chinatown. Bill reflects on a poem his father taught him to remember his ancestral village in Taishan, China.

Here’s a few other Chinese Canadian documentaries to check out: Lost Years, Unwanted Soldiers, and In the Shadow of Gold Mountain.

From C to C: Chinese Canadian Stories of Migration

A few years back in the US, you may remember a Bill Moyers documentary series “Becoming American: The Chinese Experience,” which chronicled the dramatic story of struggle and triumph, progress and setbacks, discrimination and assimilation for Chinese Americans. Director Kenda Gee created an equivalent version for Chinese Canadians called “Lost Years”.

LOST YEARS is an epic documentary touching upon 150 years of the Chinese diaspora in Canada, USA, New Zealand and Australia, covering four generations of racism as revealed through the journey and family story of Kenda Gee. Based on over 12 years of research and two years in the making. A timely and timeless journey from the world’s diverse regions that unravels injustice on an international stage, “Lost Years” follows the exodus and turbulent history of China’s diaspora as witnessed through the digital inter-leafing of three successive Chinese-Canadian generations. The journey begins in old China in 1910 and concludes with the movement to embrace redress as a concept of social justice in the modern world of Canada and New Zealand, exactly one century later. An epoch that delivers an important message, namely, “Those who cannot remember the past are condemned to repeat it.”

If you’re in Canada look for a national broadcast of LOST YEARS on CBC TV in early 2012.

Other documentaries to check out include Hollywood Chinese and Slanted Screen. 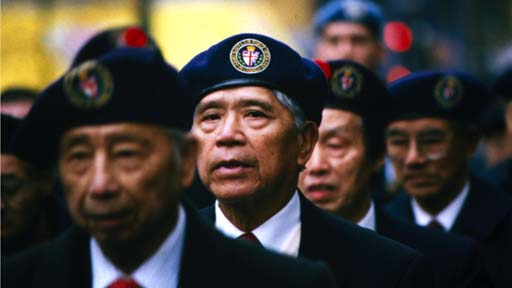 The Unwanted Soldiers documentary tells the personal story of filmmaker Jari Osborne’s father, a Chinese-Canadian WWII veteran. She describes her father’s involvement in World War II and uncovers a legacy of discrimination and racism against British Columbia’s Chinese-Canadian community. Without the right to vote, hold public office, or even just obtaining work outside of the Chinatown ghetto, the discrimination against the Asian population of Vancouver in the 1940s was real and alive British Columbia. When the war broke out, the Chinese Canadian population became ideal candidates for “blending in” secret operations in Southeast Asia. Sworn to secrecy for decades, Osborne’s father and his war buddies now vividly recall their top-secret missions behind enemy lines in Southeast Asia. Theirs is a tale of young men proudly fighting for a country that had mistreated them. This film does more than reveal an important period in Canadian history. It pays moving tribute to a father’s quiet heroism.

channelAPA.com got word from the 2011 Regent Park Film Festival (RPFF) is looking for Asian American films for their festival. The best part for filmmakers is that it’s absolutely FREE. Here’s more info:

Regent Park Film Festival is Toronto’s ONLY free-of-charge film festival dedicated to bringing the finest multicultural works relevant to the communities living in Regent Park, the oldest and largest low income housing in Canada; an area populated predominantly by new immigrants and Aboriginal Peoples. They showcase independent films of all length and genres in their original languages and subtitled in English, with topics pertinent to the various Regent Park communities such as urbanization, community activism, immigrant experiences, inner city issues, cultural identity and multicultural relationships. In addition, each year they program films for Grade 1-8 addressing themes of difference, racial diversity, bullying, gender identity, poverty, health, and other issues relevant to youth.

Regent Park residents are encouraged to create media works, through free professional training workshops, and engage in debates through panel discussions. Annually, films made by Regent Park residents are highlighted in the Family Program and in Community Stories: Youth Media Art Program on Opening Night, supporting self-representation and engaging dialogue with guest youth filmmakers from other parts of the World.

This year, they are putting particular emphasis on fictional feature and short length films from the Asian & African Diaspora. All activities as well as childcare are free-of-charge and they pay artist fees.

What are you waiting for? Submit your film online here and click on the word submissions on the home page. Extended Deadline: Friday, May 20, 2011 (NO ENTRY FEE) Post-dated

To kick off the new year, Toronto will be the first city to start off the 11th year of the Kollaboration Movement and the 6th year in Toronto. Lyon (Executive Director) takes you behind the scenes into Queen Elizabeth Theatre, where Kollaboration Toronto 2011 is being held on March 12, 2011! Remember to save the date!

channelAPA.com has the inside scoop on some of the talent scheduled to perform. Special guests include:

2011 Kollaboration Toronto (behind the scenes)

If you’re out in Toronto, drop by the Academy of Heroes event, one of the first Youtube concert in Toronto, Canada. The night will be filled with special performances by Youtube sensation stars including:

with opening performances by:
The Moon Runners (The Beat Down 2010 Champs), Chris Jackson, Tycoon the Talent, Gamble The Greedy Grin, Olivia Lauren, JReyez

Everything is going down at
The Opera House Theatre
735 Queen St. East
Toronto, ON

THIS AN ALL AGES EVENT. almost 500 people are expected to attend.