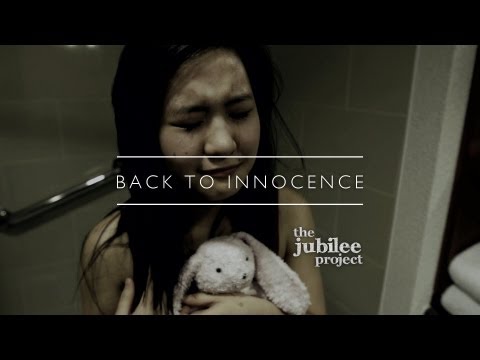 The Jubilee Project x Megan Lee teamed up for the short film “Back to Innocence”. Megan Lee portrays a child that has been sex trafficked. Throughout the video, she has flashback to her younger and more innocent times. It’s hard to watch, but illustrates the storyline from the child’s perspective. The film gives a voice to the millions of children who are forced and manipulated into sex trafficking every year. Inspired by the real injustices that children have to face, even in the United States, the film’s goal is to empower viewers to learn more about this important cause and to take action to help end sex trafficking. Join them in shining a light on this darkness and share this film with others.

By watching this film, you have been given an opportunity to be a voice in your community. Use it. When you share this film with others, let it be a tool to help empower them: hold meetings, organize events, and initiate simple conversations around this issue. Your voice matters in helping to combat this injustice.

Here’s a few more videos about sex/human trafficking: Taking a Stand by Courtney Wong, Justice Has A Name by Mickey Cho, Pieces by Sam Ock x Kero One, and Redlight by Lucy Liu.

Back to Innocence by Jubilee Project x Megan Lee

In Job 33: 25-26, it is written about the healing power of God, “let their flesh be renewed like a child’s; let them be restored as in the days of their youth—then that person can pray to God and find favor with him, they will see God’s face and shout for joy; he will restore them to full well-being.” Innocence is more than a freedom from sexual exploitation; it is the dwelling in the mercy and love of a greater power who can free us from all things dark and cruel.